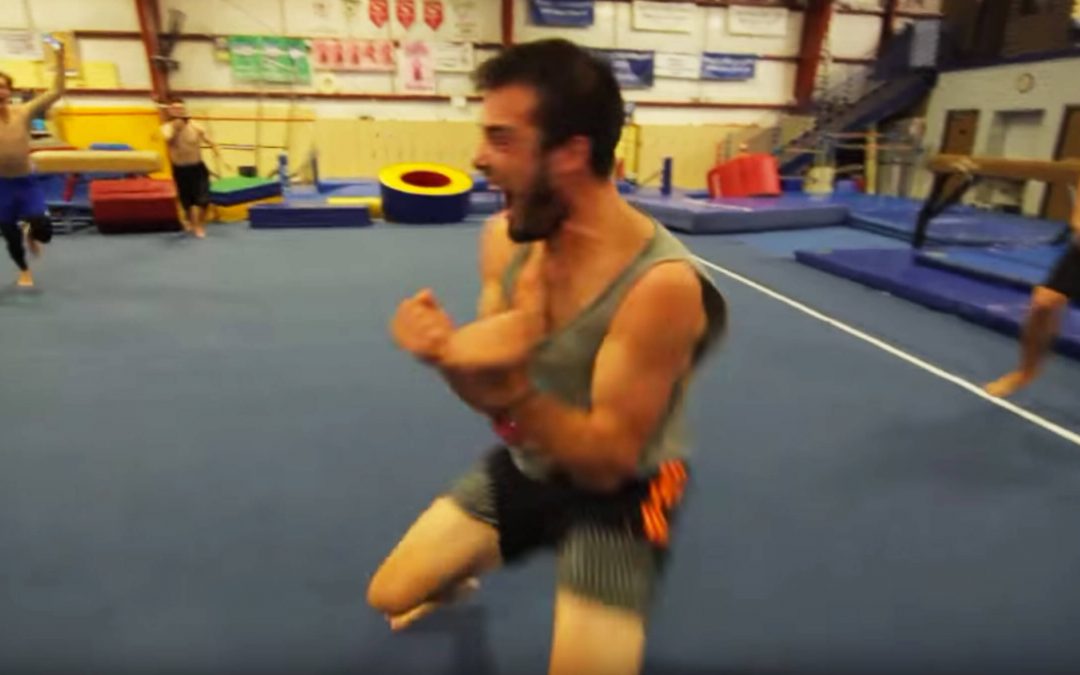 The Quad: Does It Really Count?

Let me start off by saying that I, personally, believe that Michael Guthrie has landed the world's first quad cork. So yeah, my mind is still pretty blown right now.

That being said, I know that a number of people believe that, unfortunately, it wasn't quite a quad cork. Close, but no cigar. They point out that the landing was about a quarter twist, or 90 degrees, short of four rotations. And believe it or not, they are absolutely correct. Slow down the video and pause when his feet hit; you'll see what I mean.

So now what? Here we see the latest, and arguably most important, version of an age-old tricker debate. Whether it's Nick Fry's alleged triple B-twist or just your average trick, we tend to ask ourselves: "Wait… Does that count?"

But let's back up a sec: when we watch these crazy hard moves, are we even qualified to decide whether or not they count? I've heard a number of trickers declare that if you can't execute a move yourself, you are in no position to critique others when they perform it. After all, how can you truly understand and appreciate a trick if you don't know what it feels like, if you don't know how much blood and sweat goes into landing it?

To a certain extent, I agree. But think about virtually any other sport, like gymnastics. Can Olympic coaches and judges execute all the skills that they critique? Probably not, but no one questions their wisdom. And while very few of us have the experience or knowledge of an Olympic judge, many of us still know enough to know what we’re talking about.

Let's think about this with an analogy. Let's say I mosey on into a restaurant because ya boy is craving a nice, juicy steak. I open up the menu and BOOM they've got a delicious looking steak right there, for the totally reasonable price of $19.99. (Garlic mashed potatoes included.) I order it cooked to medium-well (anything less makes me nauseous), and twenty minutes later the waiter brings over a steaming plate of...

Extremely rare steak. There are literally globs of blood coming out of the crevices, and when I cut into it, the inside is practically glowing scarlet. When I take a cautious bite, it tastes like it's barely been cooked at all. I call the waiter over.

"Hey man, I think there's been a mistake. I actually ordered the steak cooked medium-well, not rare. I mean I'm sure it's very high quality meat, but I can't eat this. I'll get sick."

The waiter squints at my plate, then eyes me suspiciously.

"Sir, would you be able to prepare a delicious steak yourself?"

I scratch the back of my head. "Well, no. I mean my cooking skills aren't at that level yet. But still, I've eaten a lot of steak in my life, and I know what a medium-well steak looks and tastes like."

The waiter turns away and starts walking back to the kitchen. "I'm sorry sir, if you can't do a better job with cooking your own steak, I'm afraid you're in no position to judge. Enjoy your meal."

End scene. See what I'm getting at here? A good chef will know how a steak works from the inside out, but anyone with a history of steak eating is a fair judge of what's rare, what's medium, and what's well-done. The answer is literally right there in front of the person's eyes and on their tongue. Same thing with tricking: even if I can't triple cork, I've seen so many and studied them for so long that for the most part, I know what I'm talking about when I give them a thumbs up or thumbs down.

And sure, you might say that a quad cork is different because there's only one in existence, so how can I know enough about them to judge? I would say that even though it was just recently landed, the idea of a quad cork is not at all new, and it's actually pretty simple: 1 flip, 4 twists, off 1 foot. Between the crystal-clear criteria and many years of seeing triple corks and quad fulls, I see no reason why I shouldn't be qualified to cast a vote in the debate. (I definitely do NOT have the final say though; I don't think anyone has that exclusive right.)

Here's a key point though: two equally knowledgeable trickers can, and often do, come to completely different conclusions about whether a move "counts." Where does a 540 gyro end and a snapuswipe begin? Sure, the answer on paper is obvious: snapus are always inverted. But the real world is almost never so black and white; it's usually more like a spectrum of color. So when you watch someone throw a snapu, it can be really hard to tell what's inverted and what's not. And even if a supposed snapu clearly misses inversion by a couple of inches, are we really ready to write it off as a 540 gyro? After all, it's still damn near inverted, and it certainly looks more like a snapu than a 540 gyro. How strict do we really want to be here, especially if the trick in question (i.e., quad cork) is a potential world first?

And sometimes there isn't even an answer on paper, let alone in practice. For example, what matters most when counting rotations? Is it how the feet land, or where the chest ends up? Or think about a beginner's B-twist, where they pull their chest too high above the horizontal. At what point does it stop being a B-twist, and start being just a jump and spin?

I guess what I'm getting at is this: on paper, it's sometimes easy to draw sharp lines in the sand. You can say, "An A-twist is always inverted, and a B-twist isn't." Or maybe, "A cheat 720 chambers the round kick leg, while a jacknife kicks with it." But in practice, in real life, it's almost never that simple. Was his leg really extended enough? Did her hips really go above her head, and at the right time? It's kind of like the meat thing again: where does a medium-well steak end and a well-done steak begin? Maybe there's a technical answer somewhere, but in terms of what really matters, how the steak looks and tastes, it's almost impossible to discern a fine line. Much like medium-well becoming well-done, or white turning gray and then black, I think a 540 gyro slowly turns into a snapu, if that makes sense.

So yeah, two qualified people can totally disagree about what "counts." And honestly, thank god they do. Because think about it: what would happen if everyone said "Yes, that counts!" about every trick? Tricking standards would plummet. No one would care about the actual definition of a trick; no one would work nearly as hard, and "close enough" would become the new norm. On the other hand, what if everyone was super strict about tricks, saying "Nope, doesn't count!" if a trick missed the mark by even a hair? People would get discouraged. Innovators would feel suffocated by impossibly high standards, and progress would slow to a crawl.

So isn't it great that we have a balance of both? We have people of both types, and their debates are what keep tricking alive and well. The "Yes" people boost morale and encourage progress, while the "No" people keep trickers honest and make sure that the criteria are respected.

So that's where we are. Those who claim the quad was landed will say that many high-rotation twist tricks are somewhat under-rotated, and they're absolutely right. Those who say that quad cork does not yet exist will say that Guthrie's trick was amazing but just doesn't fit the official criteria to count. Whichever side you're on, defend it with pride, because tricking needs people like you. But also be grateful for those on the other side, because guess what? Tricking needs them too. So even if you can't agree (and you better not!) I hope you can at least take a moment to step back from the debate, smile at your opponent, and tip your cap.

Adrenaline: Does It Suck?
11 Reasons Why You’re Not Landing It
The 4 Keys to Tricking Smarter, Better, and Longer
Trickers: Let’s Talk About Pain
The Tricking Travel Guide: Road Trip Edition
Admit It: Your Joints Suck
What Happened To New Heights?
Why I Will Never Be the Best
Why You'll Never Find "Good Tricker" in the Dictionary
Site
Help