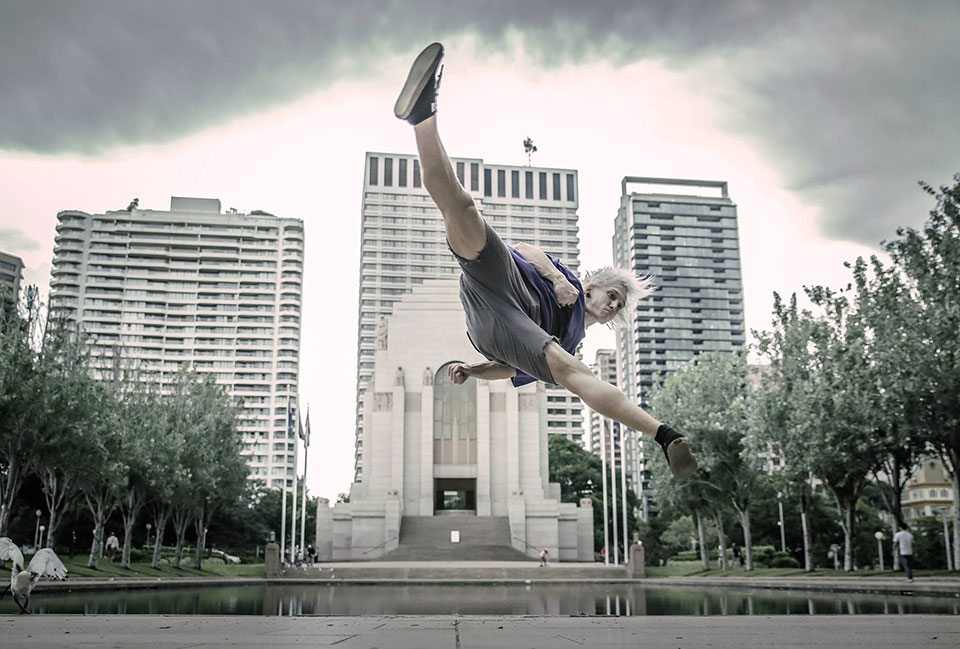 Scene: you step onto the floor ready for your tricking battle, and the randomly selected opponent makes his way through the crowd to join you in the center. And it’s Tim Farley. As in, the guy that landed the world’s first cork-in-back-out, the legendary Snatchcannon. Crap. Crapcrapcrap. How do you beat him? What’s his plan of attack? What is going on in his head?? Two pieces of good news: one, very few of us have to deal with this awful situation. And two, Tim has given us a glimpse into his brain, offering his thoughts on the strategy and philosophy of tricking battles. For our next installment in the Invincible Interviews series, here we go…

JP: What’s your strategy when you battle? Like do you usually base your combos off what the other guy is doing, or do you just do your own thing?

TF: I used to try and just one up my opponents’ combos, but I realised that was the wrong way of going about it. Now I have a lot of pre-planned combos that I have trained that I can manipulate to the situation. It's better to do things you're good at, so don't get stuck playing their game because you're likely to lose. Sometimes I take risks, but it's usually if I feel like I wouldn't be able to match their combo. Either that or I'm so hyped up that I wanna go big!

Some say that trickers get cocky and annoying when they battle. Can you have "too much attitude," or is it all in good fun?

I think that attitude is great! A bit of showmanship goes a long way, but disrespecting your opponent is something I'm against. It goes against what tricking is about. Even if it is for show, you shouldn't resort to personally attacking someone.

Should you use your biggest and best trick at the beginning, middle, or end of the battle?

If you wanna do big tricks, it depends on the what your strategy is. At the start you're going to have the most energy, so it'll be less risky. But if you plan on doing it at the end, you better save some energy for it.

Who is one tricker you've always wanted to battle and why?

I've always wanted to battle Michael Guthrie because he's the best. It doesn't bother me to win or lose, it's just the experience that matters. Other than him probably Dan Pitlock because he's one of my inspirations. It would be a lot of fun!

Is the dynamic of a group battle different from a single battle? Do you approach it differently?

A group battle is 100 times more fun than a single battle! I personally trick better in team battles because there isn't as much pressure and you don't get as tired. So long as there aren’t too many people because then is gets dangerous, as we've seen at Loopkicks haha.

Some trickers don’t really like battles. Do you think battles fit with tricking's philosophy? Or do they sometimes get too competitive, especially since tricking is such an art?

I think battles are good for tricking! They will help it grow and become known. And it can stay within the tricking philosophy so long as people stop being dicks.

What was your favorite or proudest moment in a battle?

Probably when Michael Guthrie and I battled Kite and Bailey Payne at TSG and I did cork in back out. It was the first time I had done it in months and the first time in America.

Any final tips or words of wisdom for up-and-coming battlers?

Don't let your ego get in the way of your tricks. Sometimes you feel like a trick isn't going to go to plan, so you muscle through it and cause a compromise in your body’s structural integrity. This is exactly how you get hurt. Sometimes it’s more beneficial to lose the battle so you can continue to trick the next day injury free.