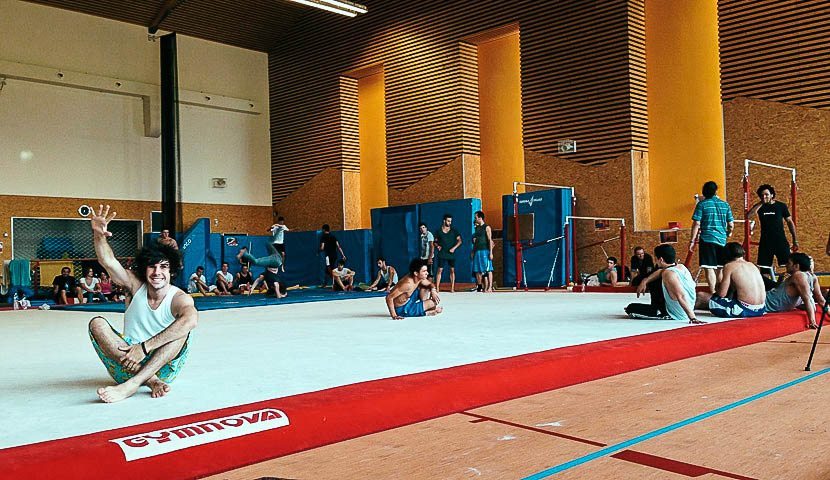 With his iconic tricks and world-famous antics, Scott Skelton’s contributions to the tricking world have been absolutely HUGE. Kicking off our new "Invincible Interviews" series, I recently got a chance to sit down with the man himself and talk about his experiences in tricking over the last ten years.

JP: Ok, the Tricking Overlord of a faraway galaxy just crash-landed in Brisbane. He wants to battle you, but he says you can fuse with one other tricker on Earth to defeat him. Who do you pick, and what is your fused form’s name?

SS: First I’d say something smart-ass like - ‘Hey Tricking Overlord, nice flying! Instead of crashing next time, why don’t you man up and swing a dub out of it?!’ I’d hashtag GetGoodRookie, and then I would transform into Rasmus Scott - Half power mover hair stylist and half childhood rock star turned organic genius of tricking technicality :P If all else fails, I’d unleash Guthrie. If that failed, I’d unleash Andrew Franklin HAHA. I’m kidding everyone, they’re both great trickers, and where battles are absolutely necessary for the growth of tricking – getting carried away with them and/or taking the good judge’s decision on a few short rounds as the final answer for who the better tricker is, is stupid haha. Either way I don’t care what galaxy that dude’s from… ANY other planet in the friggen UNIVERSE would be safer to land on for a tricking war than Earth! HOO-RAH. Sorry, I played Call of Duty for the first time this week. #Noscope

Haha great answer! You’ve been tricking for ten years now, what’s your career been like?

WOAH that’s a huge question compadre! Mannn. Summing up ten years of what I’ve seen in tricking seems crazy, I guess that’s why we all made samplers haha! Hmmm let me think for a little. Honestly all jokes aside, from my perspective it’s been completely overwhelming. One minute I’m this 17-year-old kid tricking in my best friend’s backyard, and the next I’m in places I’ve only seen in samplers! - It’s been pretty friggen wild to say the least! :) In particular I’ve been blown away by the kindness of trickers and their communities. Especially in later years, it’s really impacted me. Seriously, I haven’t met a single tricker in all the years of my travels who wouldn’t open their heart and home to others without a second thought. Considering how cold people in this world can be to each other sometimes, I think that’s pretty mind-blowing. It’s like this amazing unspoken code of brotherhood that runs into the deepest parts of the sport and when you witness it, it’s really something special. It doesn’t matter where on this planet you are, if you find trickers, you find family. Whatever it is about it that connects us – Tricking, absolutely, in every way shape and form, makes this world a better place.

From a skill perspective, it’s incredible to think 10 years have passed already for me (I thought I’d be way better at this shit by now HAHA). Damn, when I first stepped onto a floor double cork wasn’t even a skill yet, and now look at us! The speed of tricking’s development has been nothing short of ferocious!!! Personally, I just feel happy to have helped in whatever way I could. It’s been a serious honour to grow up with the titans of my generation - Thomas Mariman, Daniel Pitlock, Vellu Saarela, Daniel Graham, Mogwai, Nick Vail and so, so many more. It’s no surprise that tricking did what it did in the hands of these good men, in the hands of all trickers really :)

What are you up to nowadays?

Eekkk XP Today I’m 27 years old, and while I’m definitely tricking/training more this year than ever, I’m also very happily getting a little older haha. To be truthful, I always thought this kind of thing would be really scary, but now that I’m here it’s actually the most surprisingly beautiful thing ever. Right now tricking has sincerely become way more relaxing and enjoyable than it’s ever been for me and I’m happy to say that adding a few more years hasn’t affected my ability to keep old skills while chasing new ones. If anything, you just have to take more time to incorporate conditioning and invest in methods of smarter application - Which I think results in way cooler stuff anyway (Look at Sesshhh!). Altogether, it’s almost like changes in your body create this whole new opportunity to challenge yourself in brand new ways! I don’t know, for me that’s really been the essence of what I’ve always loved about tricking all along - No matter how far you come, you’re always the underdog in your own mind.

So… Arcade Lions really is your last sampler? :(

Yes. No. HAHA ohhhh god damnit I hate this question XD. The truth is, I actually make 100’s of samplers a year! I have since I first started tricking and I’d encourage everyone to do the same. It’s a wonderful way to capture the things today you may realise you took for granted years later - Plus seeing the evolution of your life, and the impact tricking has had on it, can really help put how far you’ve come into perspective on days you’re struggling! As for another official sampler, I just don’t know haha. I always look at Arcade Lions as the final Horcrux of the insane journey tricking took me on, but here in 2014 I’m still somehow blessed to be travelling around the world for it, so it seems that the adventure’s far from over. That being said, I do actually have one more hidden away, but it’s far from the type of video I usually make. Call it The Lost Sessions – II, if you will. One day, some day maybe, if people still care I guess? But for now it has a lot more work left on it :) Long story short - I love tricking haha. It’s my heart and soul and it always will be. The only thing I know for absolute sure right now is that I’m going to trick and be involved in the sport and community for as long as it’s kind enough to have me.

That’s great to hear :) Do you have a message or some advice for trickers these days?

Hmmm, yeah I do actually :) A while ago a good friend told me that the energy we’re given, the same energy that makes us human and able to think for ourselves, is a lot like a fire. Because tricking only attracts a very special kind of person, your fire is likely many, many times more powerful than the fires of the everyday people around you. This is probably why many of us feel so weird in school compared to our friends, or out of place in regular society – I don’t know. The point is this: no matter how you see other people act or how they treat you, please - don't use your fire as a weapon to harm or retaliate. If you can struggle through the intense difficulty of learning to trick, your injuries, and those four parkour kids that keep leaving their vault boxes on the floor, then you’ve already proved you’re capable of so much more. The real world can be an empty place and many people never get to experience the love and sense of belonging we share here in tricking - So if you feel it, take all of that incredible energy and use it for something worthwhile! Use the same fire you put into your skills and samplers to help keep your close ones and others less fortunate happier and warmer.

That's deep man... Sounds like you could be a counsellor or something! What do you do in the real world?

HAHA I actually work as a clinical psychologist here in Brisbane city! I’m ridiculously interested in metacognition and psychopathology, so I’m very lucky to currently work with a team of specialists involved in the development of programs for the prevention/diagnosis/treatment of suicidal tendencies in adolescents. I’ve already been through what seems like a lifetime of uni, but my experiences this year in particular have really opened my eyes to how many people are struggling with this kind of thing, and I was really encouraged to undertake further study within a PhD. These two things together pretty much take all my serious time in the real world at the moment, but who knows?! Maybe one day it’ll pay off and I’ll become DR. Double ABCDEF hahahaha!!

Triple cork, Dub Dub, what was it like creating those skills?

I got lucky haha! No I’m freaking serious, that’s honestly all there is to it. I’m no genius of tricking. Believe me, there were sooo many amazing trickers chasing that skill around that time, and it could have been anyone’s! I was just lucky enough to be the guy that was in the right place at the right time. Nothing more, nothing less.

Do you have any other random talents aside from tricking?

I can a fly a plane believe it or not haha! I was lucky enough to have the opportunity to get my pilots licence when I was around 16 (before tricking took over everything I care about XP). This year I also graduated the training program for volunteer firefighters in Brisbane’s central business district, and now I’m doing that when there’s time. I’d be lying if I said I was there for any other reason than the chance to kick other people’s doors in though.

Dang that’s nuts! But now we arrive at the final question… The one everyone’s REALLY wondering about… What’s up with you and Vellu??

I don’t know what to tell you man, shit got pretty real this one time at Teyman’s house when we were in Israel. I can’t remember how it started, but we found a Korean pop song and some standard issue police riot gear in his basement and yeah, things were just never same XD We’re trickers haha - I like to think anyone would have made the same decision in place of us.