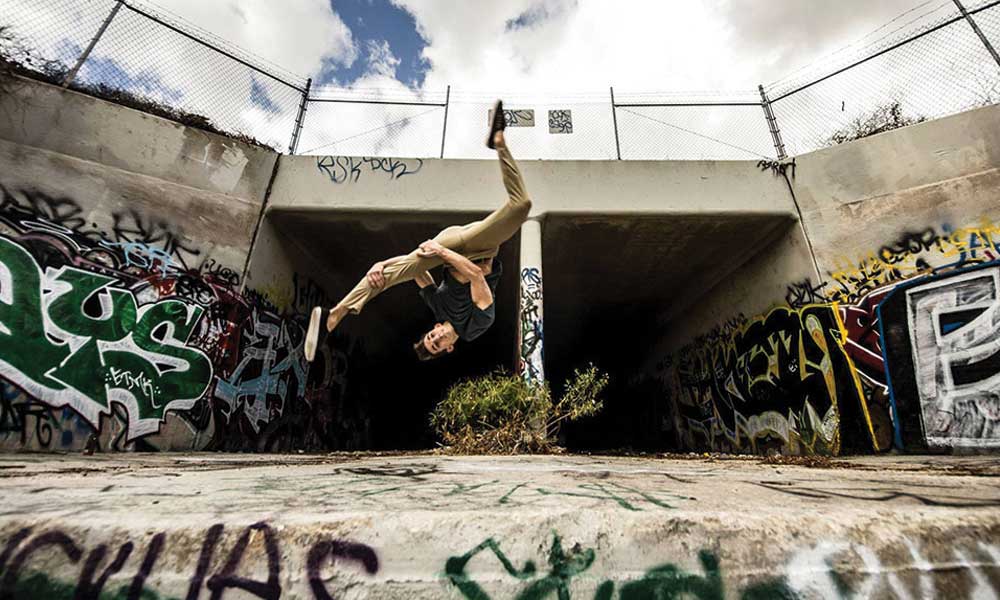 Picture your dream job. Go ahead, take a second. We’ve got time.

All set? Good. Now, I’ll bet it involves tricking, right? Training every day, doing flips for thousands of screaming fans. Maybe flying around the world, meeting celebrities, getting paid some serious cash… And teaching tricking at a world-renowned gym in your spare time. Sounds like a fantasy. But the thing is…

Someone lives that fantasy. And his name is Kyle Potter.

That’s right folks, Kyle is one of the very few athletes in our world who could be called a Professional Tricker. This guy has done all that and more, including performing with Katy Perry at the Super Bowl last year. So for those of us who dream of living this kind of life, I present to you the inside scoop: a synopsis of Kyle’s crazy stories and helpful advice in our latest Invincible Interview.

Kyle basically came out of the womb already tricking. In fact, he says he was doing back handsprings and aerials since age 6 or 7. But he’s more than just a tricker: he started martial arts at age 4, and he holds a 3rd Degree Black Belt in Americanized Kyokushin Karate. He also practiced Shōrin-ryū with the legendary Sensei Sharkey in Naperville, Illinois. And thanks to Sharkey’s training, Kyle competed in XMA with Micah Karns and Team AKA. But he soon found himself face-to-face with what he calls his “big break:” an invitation to perform with Team Sideswipe.

That’s when things got crazy, as he and Team Sideswipe were traveling the world for their shows. They dressed up as Power Rangers and performed at the Macy’s Thanksgiving Day Parade in New York City. They flew to Qatar to do flips at an international pro tennis tournament. They tricked for eight minutes nonstop at center court for a Dallas Mavericks Halftime Show. They even traveled to Guantanamo Bay, Cuba to perform for the troops, where Kyle swears he saw “hundreds of rats the size of cats.” But perhaps wildest of all was their time in Las Vegas, where 9 of them spent 8 months putting on a tricking show called Sideswipe Live at the Tropicana, a popular hotel and casino. Kyle reports that it was a tough 8 months, performing for one hour straight, 7 nights a week, no matter what. But hey, that’s what it takes to be a professional entertainer!

And Kyle knows quite a bit about the “controlled chaos” of the entertainment industry. Though he’s originally a Florida native, he moved out to LA as a teenager to find a niche tricking and performing. He then started getting hired to do stunts for music videos, since “the dance industry is really interested in tricks.” But none of it compared to the day Kyle got a call that would change his professional life.

And by “Kyle” I actually mean Kyle Cordova. Let me explain… One day, Kyle Cordova got a call to be a backup dancer for the one and only Arianna Grande at an upcoming performance. But he had already booked a different show on the day Arianna was performing, so he recommended that Arianna’s people contact Kyle Potter and Micah Karns. And bang, the two of them got booked to trick and dance alongside Arianna Freaking Grande at the 2014 Video Music Awards, slaying the performance watched around the world. And yes, Kyle did hang out with Arianna. “She was super personable and nice,” he says. “After rehearsals we went back to her place and played pool.” Excuse me while I claw my eyes out with jealousy.

After that, Kyle signed a one-year deal with an agency called Clear Talent. He has continued working with Arianna’s choreographers and taking his dance training more seriously. He’s never been a dancer before though, and he definitely feels the pressure to memorize routines quickly. “It can feel pretty awkward,” he says with a laugh. But he’s doing it right, successfully joining forces with Todrick Hall of Broadway and American Idol fame. Kyle performed in a couple episodes of Todrick’s new TV show, which you will find on MTV in the coming months.

But Kyle’s résumé keeps getting better. Remember how I said he performed with Katy Perry at the Super Bowl last year? With millions, MILLIONS of people watching? Yeah. Let’s talk about that for a sec.

Kyle was personally asked to perform at the Super Bowl via his talent agency, but the initial excitement was soon tempered with long, hard rehearsals. He trained from 8 am to 6 pm day after day, tricking on hard floor the entire time. “It’s pretty taxing,” he says. “I don’t wanna throw snapu 50 times a day on concrete, so you gotta figure out what people usually like to see and give them that.” What tricks does the average entertainment industry Muggle like the most? Gainer switches and swingthrus for sure, and at the end of the day, “everybody loves a good webster,” Kyle says with a grin.

So what’s a combo that Kyle had to drill for the big day? 540, cartwheel full to knee. Simple, right? WRONG. He explains that the stage was super slick, and he had to wear these weird Italian leather boots, a unitard, and a leather belt. All of this stuff combined made tricking almost impossible, not to mention the fact that he had to carefully avoid hitting the cameraman or Katy with his flips. And when the day of the Super Bowl finally came, Kyle felt totally beat up. He had been slamming his knee into the ground hundreds of times during practice, and he had dislocated the ball of his foot just a few weeks prior. But despite all that, he still pulled off a killer performance and blew the minds of people across the globe.

I also talked to Kyle about his time at Joining All Movement, better known as JAM. This LA gym offers classes for tricking, martial arts, parkour, dance, and more. Basically, it’s Tricker Heaven. And Kyle gets to WORK there, teaching and training alongside the likes of Anis Cheurfa, Jeremy Marinas, Danny Graham, Donovan Sheehan, and more. After Travis Wong invited him to teach there, Kyle met the head coach, Dan Perez. “I thought I understood tricking, but then I met Dan Perez,” Kyle says, shaking his head in admiration. After learning more about TKT (True Kicking Terminology) and how to effectively link moves together, Kyle claims that his skills have improved significantly from his time at JAM.

So with all the long rehearsals, the early mornings, and the raw physical demands, has tricking become too much of a “job” to be fun anymore? “Nope! I’ve never had more fun with tricking than I’ve had in the last two years,” Kyle says. “Some people have to go to work from 9 to 5, but I get to go do what I love to do. I can’t be mad.”

How has his approach to tricking changed since turning it into a real job? “I take care of my body more,” he says. “If I can’t flip, I can’t work. So I have to worry more about longevity than impressing my peers.” As a result, he stretches, rolls out his muscles, and eats healthy on the regular.

To wrap things up, I asked Kyle to provide some advice for you trickers who want to turn your skills into a career like his. And here’s what he said:

“If you really want something, it’ll happen. You just have to make it happen. You can’t sit back all the time! The Sideswipe guys called me one day, and I just packed up my stuff and moved to Cali within two weeks, immediately getting a job teaching at a gymnastics place. And sure, I definitely had some good luck along the way. I was at the right place at the right time, but that’s because I put myself there.”