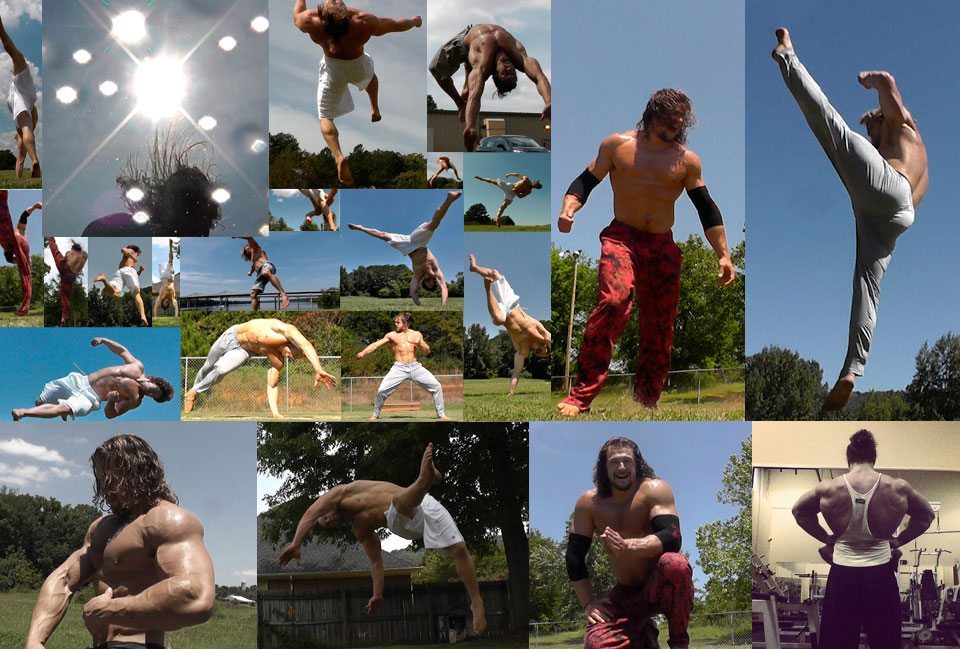 They say he trains backflips with cinderblocks tied to his feet.

They say the movie “Taken” was loosely based on the time someone borrowed his protein powder without asking.

They say he once glanced at a beautiful woman, instantly impregnating her with the men we know today as Thor and Jesus.

Yes, they say a lot of things about Jon Call, a.k.a. Jujimufu. One of tricking’s most legendary Internet gurus, Juji launched trickstutorials.com in 2002, forever changing the way that trickers around the world learn new skills. He also happens to be an incredible bodybuilder and strength training expert! After a 15-year tricking career, Juji has played a key role in the development of tricking as a sport, art, and community, so I decided to find out who Jujimufu really is and what’s been on his mind.

JP: As someone who has really seen tricking grow up, what is the biggest difference in the sport and culture between then and now? What do you like most about the direction tricking is going, and what do you dislike?

Juji: When I started tricking in 2000, YouTube and Facebook weren’t even around! Facebook wasn’t around until 2004, YouTube didn’t come out until 2005, and neither were really gaining popularity until about 2006. So the first 6 years I tricked, there were barriers to sharing videos and connecting with tricksters. The technological platform differences resulted in a cultural difference. If you wanted to connect, you had to register a username on a tricking forum and participate in discussion and sharing there (hence, more tricksters had nicknames… like… say… Jujimufu). And if you wanted to get noticed, you had to make a well-edited SAMPLER video. There wasn’t any easy way to share clip after clip of single tricks day in and day out. So back then, most tricksters economized their tricking footage by saving their clips to make a sampler video for the season or the year. So the sampler was a benchmark to strive and train for, it was a rite of passage. When you made your first sampler, it was sort of like you finally made it as a trickster. And if you made one sampler, your next one should be better, right? The sampler was the centerpiece of the tricking world. Now with Facebook and YouTube anyone can upload any single clip, any time and all the time… So now there is a flood of single trick clips and sessions and battles, you name it… I find this accessibility helpful for getting immediate feedback or providing coverage for events in the tricking world, but I sort of miss the big, bombastic, video projects tricksters used to work on secretly in the background and “save up” clips for, so they could “release” it and shock people with all they’ve accomplished for an interval. Lots of people still make sampler videos, but more are just posting quick clips as they happen on Instagram and Facebook. Compiling clips into a video is an afterthought now if a thought at all, not a centerpiece of a trickster’s efforts.

Hmm that’s a good point. What tricking-related accomplishment are you most proud of?

My tricking video Aerosterous. I put all of my heart and soul into that video! It was 4 years worth of my favorite saved footage compiled into a complicated 2 minutes and 30 second video sampler. That’s what I mean by a sampler video. I think a lot of tricksters nowadays are missing out if they never take the time to compile and edit their collected footage together into a meaningful video. The feeling you get from making something like this is one of the most rewarding feelings you can get from tricking and one of the coolest products you can generate with your skills.

And of course I’m proud of my website projects trickstutorials.com and acrobolix.com. I still get messages every day from strangers thanking me for sharing what I know and introducing them to tricking. I connected a lot of people. This makes me feel warm and fuzzy inside and motivates me to continue.

Yeah man you’ve influenced a ton of people! Do you have any other random talents or abilities aside from tricking?

Well I’m a recreational bodybuilder of course, and I am strong on the powerlifts. I have a passion for building strength and muscle. I balance tricking and bodybuilding and coined the term Acrobolix (Acrobatic + Anabolic = Acrobolix). It’s my style of tricking that I’m trying to develop and spread. Personally I am no longer happy exclusively tricking, nor am I happy exclusively bodybuilding, but I am happy combining both.

As far as other things: I’m an expert at flexibility training and am writing an eBook on it. I know an awful lot about health, nutrition, dieting, drugs, and human biology. I’m a keyboard shortcut wizard. I am good at trading stocks. I have a knack for coming up with brilliant ways to organize or streamline things (lifehacks). I’m excellent at remembering names. And I have a banshee laugh.

Dang, you’re quite the Renaissance man! Back home in Florida, I always make fun of my MuggleSlayers teammate because he can easily quad full on tramp, but can’t park a car to save his life. Is there something really easy that you simply can’t do?

Psshh “average.” As if! Haha anyway, what is your best tricking memory?

All my best tricking memories were all beautiful afternoons I was alone having a great grass session out in the middle of nowhere, with no other human beings anywhere nearby or within sight… Before I had a cellphone, it was total disconnect… Like I was all alone on this earth, dancing underneath the sun full of vitality and capability. During those moments, I felt my existence was fully justified.

What a cool thought 🙂 What is one random thing about you that not many people know?

I take up to 6 grams of Niacin everyday for heart health. It’s not as easy as it sounds. Ever heard of a Niacin flush?

I haven’t, but it sounds unpleasant… So what are you doing now? You have a brand new website right?

Yep. Acrobolix is my new website. I’m building on it to help people interested in just tricking or tricking well with more muscle mass. I’m passionate about it.

As far as training goes… In 2013 and 2014 I focused primarily on bodybuilding while maintaining a semblance of my tricking aptitude. This year, 2015, my goal is to focus primarily on tricking again, while maintaining a semblance of the physique I built these past couple years. There are some basic and intermediate difficulty tricks I want to learn, and I want to work more variations. Much like Sesshoumaru (Sean Ellis) and Steve Terada have done in the past few years. Have you noticed their styles change as they’ve aged? They’re both a little older than me, me being 29 at the moment, they’re in their 30s. They probably feel their bodies slowing down, and they both have accumulated some injuries over their tricking careers. I’ve noticed that instead of feebly holding onto their best power moves of their youth, or simply giving up tricking like a lot of others, they’re varying their basic and intermediate tricks and trying to be more “stylistic” and “unpredictable” … I have to say I absolutely LOVE this direction they’re taking with their tricking. It seems to be a very smart strategy too for tricking longevity. So that’s what I want to do this year with my tricking, and I want to make another crazy sampler-style training video of course at the end of the year!

Awesome! Can’t wait to see a new, crazy video! To wrap things up, if you could give one piece of tricking advice and one piece of life advice to everyone reading this, what would it be?

Tricking advice: Stop tricking like there is a certain way tricking is supposed to be, and start tricking like you want tricking to be. Read this page on my website in particular about this process.

Life advice: Well I have to pick just one thing… Stop playing Kendama!!!

Want more words of wisdom from the glistening physique and sharp mind that is Jujimufu?