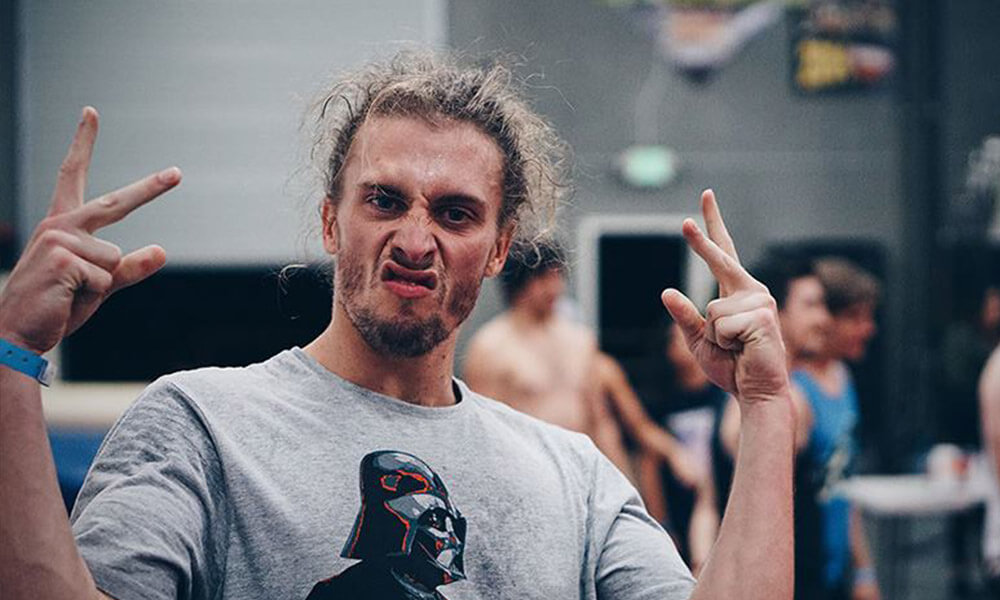 On just about any list of the world’s top trickers, you’re bound to find a legendary Frenchman. He’s often known for sporting the long, dark hair of a samurai, the circular glasses of a professor, and the horrifying picture-time face of that thing that hides in your closet.

Ho yes. It’s time for a chat with Ben Cauvy.

After he spent the summer hitting all the best US gatherings, and years touring the world, I decided we all needed to hear some stories from one of tricking’s wisest and most widely loved goofballs. Skyping me from Toulon, France, Ben’s eyes vibrate an electric blue as he starts our latest Invincible Interview with a very simple matter: where did it all start?

At age 17, he had been living in Toulon, doing a bit of bboying and parkour and random flips. But everything changed when he found Kalman Csoka’s Bilang sampler. “It blew my mind. I was like, WHAT THE HELL, as Jason Goma might say,” Ben laughs. So he started tricking, and a short few months later, he moved over 800 kilometers away to Paris with just one thing on his mind: tricking. “And it was one of the best decisions I’ve ever made,” he says.

From then on, Paris became a home base from which he traveled across the world, both for tricking and just for funsies. He went all over Europe, America, and Australia of course. He spent a full 9 months hanging out with the Dynamic Duo from Down Unda, aka Scott Skelton and Phill Gibbs, just to train and enjoy the Aussie vibe. “That’s when I started tricking in order to get really good at tricking,” Ben says thoughtfully. “And when I started to get recognized by the community.” He also spent a good chunk of time in Asia because, as he says with an enigmatic yet casual shrug, “I have a good vibe with Asian people.”

But wait, how does Ben do it? We’d all love to travel the world, trick, and make new friends… That’s like, the dream! But it’s also like, stupidly expensive. “People who say ‘it’s too expensive’ are usually busy spending that money on something else,” Ben explains, scratching his beard. “But everything I save, I put toward transportation. And trickers are awesome, they offer to host you and stuff. Plus, I kind of like traveling ‘homeless style.’ I just bring my tent and my backpack, and I go.”

After all that globetrotting, Ben has more than a few bizarre stories to share. He starts telling me one that makes me instantly jealous: he just so happened to be visiting the Japanese island of Yakushima, the real-life inspiration for the beautiful forests in my favorite movie of all time, Princess Mononoke. (If you haven’t seen it, seriously stop reading and go watch.) Anyway, Ben was walking along the side of the road, hoping he could hitchhike up to the highest point on the island. Before long, a Japanese tourist stopped for him, Ben hopped in the back of her car, and off they went.

Now, there’s something you should know about Yakushima, Ben explains to me. There are tons of wild monkeys living in the forest. Like, TONS. And when they get hungry, they like to hang out near the roads, hoping that a generous human will come by who can supply them with food. But they’ve learned that humans aren’t always generous enough to freely fork over their goodies. And if a monkey’s gotta eat, well… A monkey’s gotta eat.

So as Ben was happily bouncing along in the seat behind his Japanese driver, a screeching mass of fur leapt through the open window and into the front passenger’s seat. The monkey began darting all around the front of the car, screaming and frantically searching for food it could steal. “The woman started to freak out,” Ben says, and it was at that moment that he decided to take matters into his own hands.

From the backseat, Ben calmly reached forward and opened the front passenger door. He then tapped the monkey on the shoulder, and when it turned to face him, Ben wound back and literally slapped the monkey in the face. He hit it so hard, it flew out the open door, and the day was saved. As for Ben’s driver, “she gave me so many arigato” he says with a laugh.

But let’s get back to tricking for a sec. “Got any crazy stories about tricking?” I ask him. Ben gazes away from the camera, thinking for a moment. Then he looks back. “I’m not super proud of this one…” He grins with goofy nostalgia. “But hey, I’m gonna tell you.”

On the first Xswipe tour through Europe, Ben and his buddies were in Denmark. They were at an overnight session at a sick gym, and they somehow crammed 15 trickers into a 5-person sauna which, combined with all the alcohol they were chugging, was a “very, very bad idea.” After drinking enough liquid courage, Ben finally worked up the nerve to approach one of his biggest tricking heroes: Rasmus Ott. “I was very, very drunk,” Ben says. “At some point I went up to Ott and was like please drink with me, please drink with me! I honestly don’t remember it very well, but I was like please please come on! And Ott is more of a reserved kind of guy, so he was like, ‘No, man, I’m sorry but no.’ I was very intrusive… Fanboying wayyyy too much.” To add insult to injury, Ben and the boys then proceeded to throw up. A lot. Everywhere.

Fortunately though, this shambly story has a happy ending. At the first Hooked gathering, Ben approached his longtime role model and apologized. Ott is a great guy, so he said it was no big deal. And nowadays, the two are on great terms. So for all of you who feel kinda awkward around your favorite trickers, just remember that it happens to all of us, even one of Europe’s best!

Speaking of awkward social situations… Ben’s so obscenely good at tricking, I have to ask: “What’s one thing you’re really bad at?” He laughs. “I am very terrible with seducing.” “Like with girls you mean?” I ask. He nods. Then he begins using a lot of air quotes to explain how he hates the whole “game” people have to play to express romantic interest. “If I care even that much,” he says, pinching the air in front of his face, “I always make the whole thing messed up.” Now here’s a man I can relate to!

Before closing out the interview, I ask Ben if he has any final words of wisdom to share with our readers, or maybe a piece of advice. After thinking for a moment, he explains that before he started tricking, he struggled with school. “I’m not a school person,” he says simply. But during a trip to China, Ben met a geography teacher who changed his life forever. He told Ben that whether it was school or something else entirely, Ben should push himself to achieve whatever he truly wanted. “He told me that I was actually my own master. I had the key of my own destiny, if I can put it that way,” Ben says. And the following year, these were the words that gave Ben the strength to move to Paris, to achieve his dream of becoming a truly great tricker. And look at all he’s accomplished as a result, all the skills he’s conquered and all the friendships he’s made! And he’s not the only one who can do it. “You have the power to be whatever you wanna be, and do whatever you wanna do,” Ben says with a final grin. “So go for it! Because no one else will do it for you.”

Jeremy Price
Editor
More tricking posts
When are you REALLY a tricker?
Invincible Interviews: Tim Farley on Battles
The 4 Keys to Tricking Smarter, Better, and Longer