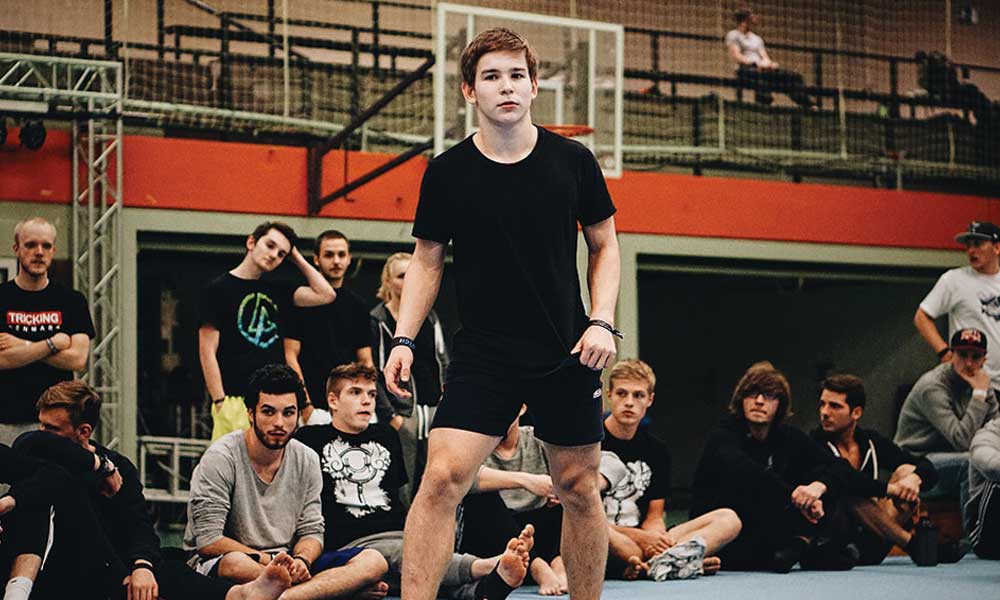 Once upon a time, in a magical land far, far away, Michael Guthrie could not backflip. Andy Le failed every jacknife attempt, and Scotty Skelton could not land a b-twist to save his life. But the crazy part is, this is no fairy tale. That’s right, ladies and gentlemen… This really happened.

But when we watch these incredible trickers, it’s easy to forget that they once struggled with the easier stuff. And when you just can’t get a grip on that cartwheel full or that cheat 900, suddenly you start thinking, “What’s wrong with me?” The answer, of course, is nothing. Even the best out there had to fight tooth and nail to perfect their more basic skills, and to prove this, I asked some top tricking athletes to tell me about the struggles they faced earlier in their tricking lives.

Jujimufu of trickstutorials.com and now acrobolix.com has long been one of tricking’s most visible Internet gurus, but the corkscrew eluded him for a while. According to Juji, “It’s a move my body has never really liked… Moves like fulltwists and stuff are hardest for a larger person, so the cork was really hard to keep.” How did he deal the challenge? “For the cork I had to stop trying to land it and start to focus on changing one thing at a time. Like I started to twist from the very beginning of the jump without waiting for my leg to come all the way up. Then when I went back to focusing on other parts of the move, my body remembered how to twist!” His best advice? “Try to figure out a different way to screw it up. Screw it up in a bunch of different ways and it finally starts to work.” I like it!

Team Loopkicks’ Nelson Zuniga is no stranger to tricking troubles either. A move he frequently had issues with was double full. “I tried it for so long and was so close, but I had trouble with it for like 2 years.” Rewinding the clock even more, Nelson echoes Juji, saying he “landed cork pretty quickly but lost it.” The solution? “I kept reworking it and trying different setups, like touchdown raiz or masterscoot instead of just J-Step. And it finally clicked!” Fast forward a few years and Nelson is spamming cork whacknifes and was maybe even the first person to land it! His final word provides a healthy dose of perspective: “Don’t give up, don’t get frustrated. It’s not gonna come to you overnight!”

SGTF team member John Franks battled with a few intermediate-level moves himself, most notably the illusion twist, which “thwarted [him] for years.” But John adopts a great policy for tough moves: “if it’s just not working, don’t kill yourself over it. Keep training overall tricks, and let it come when you’re ready. There’s a fine line between working your butt off for a move and getting in its way.” In short, be patient until the move “clicks.” It has certainly paid off for John, who has not only mastered the illusion twist but can also dub dub with ease.

Adding to the growing chorus of cork trouble, Alex Hunter of Loopkicks explains that, “For the first 5 years of my tricking, my cork was very weak. I didn’t understand the timing of the twist and flip, where to spot or a good takeoff. Much later in my tricking career, I figured out how to spot the ground, which gave me a reference point to stare at while I spun. In 2008, I drilled J-Step cork 100 times a session. I did the same with gumbi cork and touchdown raiz cork. After this I saw huge level ups, and cork is now one of my all time favorite tricks. I used to think I’d never get good at it.” Aside from drilling the move, Alex suggest that you “film yourself and really study in slow motion” because for him, “it feels one way in the air and then totally different on camera, and I can see what I can do better.” Watching his corks now, you would never guess that Alex had such issues, but this just proves how even slow progress can take you to incredible heights.

Another great success story is Ricky Pheng of Torque Tricking. Early on, Ricky’s 540 kicks were not exactly perfect… In fact, he landed smack on his face “a good 100 times.” But he soon conquered the trick, eventually taking on a new “arch nemesis:” the snapuswipe. “I was always trying it and not landing. Even sprained my ankle working on it… I was trolled by Will Coneys, who told me that Santa will bring me a snapu next Christmas… That fueled me. I studied his, Terada’s, and Donovan Sheehan’s snapu while I was injured. When the ankle was better, I went back to work. Once I started inverting, it took only a few tries to finally understand it. Brought it back to the gym and surprised Coneys with it, and I got his approval! Instead of waiting 11 months til Santa came, Christmas came early for me because of hard work and perseverance.” As Ricky’s story shows, staying determined both on and off the gym floor WILL get you there. You just need the drive and the positive attitude to stay the course.

Tricking is really freaking hard. Seriously. So when you see the latest brain-busting sampler come out, don’t beat yourself up about those tough moves that you “should” have by now. Every great tricker was once exactly where you are skill-wise, so give yourself a break! And no matter what, remember… you are WAY better than all those Muggles ever will be!