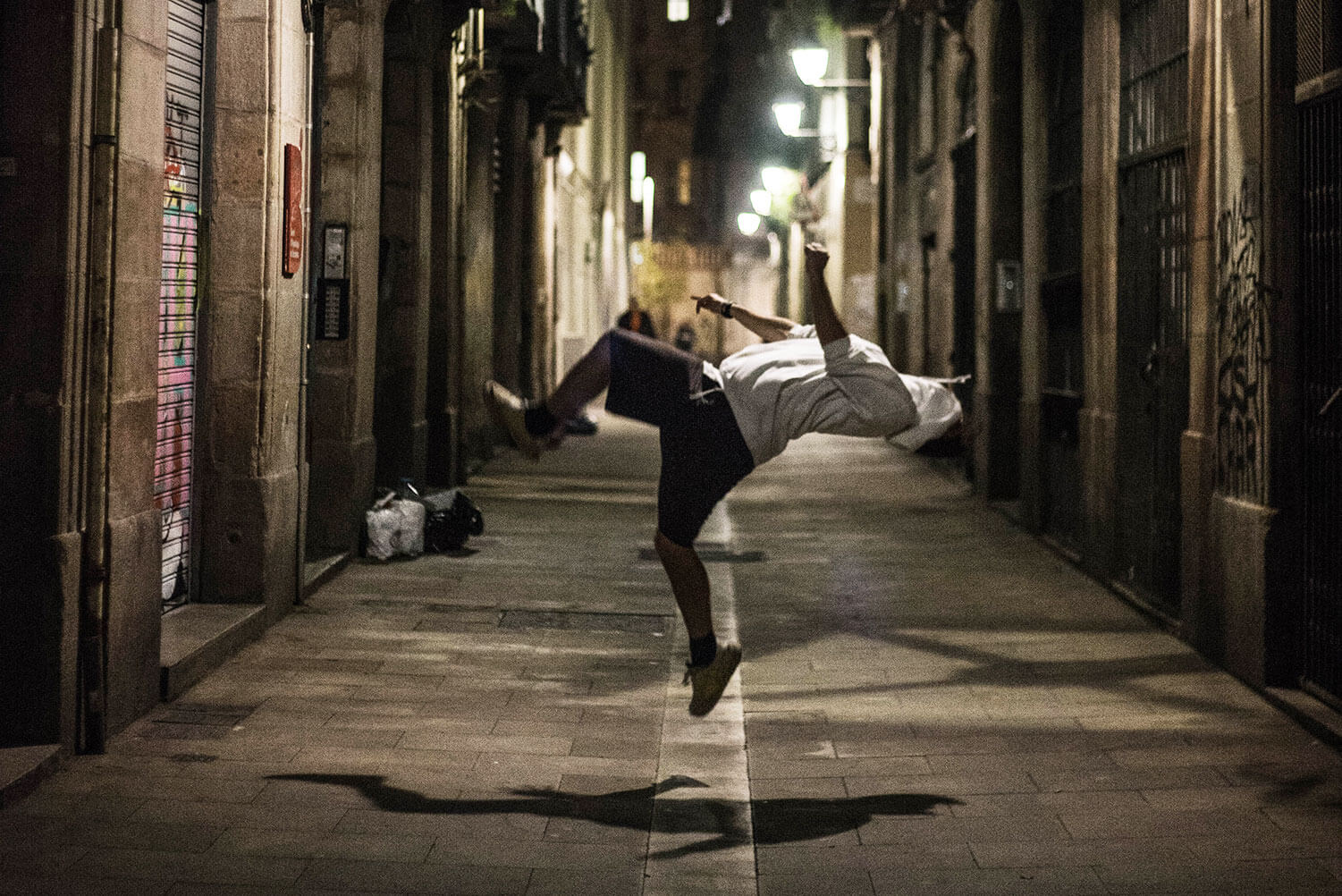 11 Reasons Why You’re Not Landing It

One of the things I love most about the tricking community is that our top coaches are usually our friends and peers. So we find ourselves asking and hearing a lot of, “Hey dude, got any tips?”

And what I’ve noticed over the years is that, despite the massive variety of tricks out there, the answers to that simple question are often strikingly similar. So here’s a little compilation of the best and most common pieces of tricking advice I’ve heard throughout my 10+ years of training.

You’re probably not landing the trick you want because...

As Danny Etkin illustrates beautifully here, your twisting problem could actually just be a flipping problem. If you land your twisting tricks with your chest awkwardly low, or if you land on your hands and knees, notice that you actually are finishing the twist—but your feet just aren’t making it to the ground in time. That’s because you need more flip!

This is also true for certain transition moves and swing chains. Want to swing out of your raiz, but don’t feel quite ready? That could be because you’re landing with your chest too low, which means that you aren’t flipping enough. If you flip harder, you’ll land with your chest much higher, and your swing leg itching to launch you skyward.

But how to create more flip? That depends on the trick, but checking out what your arms are doing is usually a good start. (More on this later.)

I often see people struggling with a big move, but the real problem lies in their setup, which has yet to be perfected. If you’re trying to land a double cork out of a masterscoot, you can’t expect to land it if your masterscoot is uncontrolled and inefficient. So focus on perfecting your setup—drill it until you can do that shit flawlessly, on command, in your sleep, and possibly while hammered. Once you’ve figured that out, and determined how to get maximum power out of it, the big move that comes after will practically land itself.

3. You're trying too hard

I was at a session once, and a new guy asked for tips on his touchdown raiz. To demonstrate, he backed up, did a massive running spin step, and launched himself into a jerky, awkward TDR. He believed that to get maximum power out of the trick, he needed to put maximum power into the trick. That is complete BS.

Sometimes landing a trick—like a triple full—does require more raw power, but for most moves, applying maximum strength usually means that proper technique goes straight out the window. You’ve got to start slow and focus on channeling your momentum smoothly and correctly, building power until you can explode at the right time. Powerful tricking means being like water—knowing when to flow, and when to crash.

For you beginners out there, spotting means using a visual point of reference to figure out how your body is oriented in the air. For example, when going for a backside 9, you might spot (focus on) the wall in front of you, then jump and spin, and when you see the wall again, that’s when you know it’s time to bust out the round kick.

Now at some point, you very well may be able to execute a given trick without spotting. After seeing Brayan Ruiz hit 202 blindfolded, I became convinced that spotting can sometimes be nothing more than a helpful set of training wheels. But until you master a trick, spotting is massively helpful because of a simple fact: Your head goes where your eyes go, and your body goes where your head goes. In other words, if your eyes drift toward the ground in anticipation of a fall, the ground is probably where you’ll end up.

But if you spot properly, you don’t get as lost in the air, and you’re more likely to land properly. Say you’re going for a backside 1080, which involves two in-air vertical twists. By spotting between twists, you can break the move down into smaller, more manageable parts. Spot ahead as if you were about to throw a round kick for a 900, then just turn and hook instead. Much easier, right?

5. You're doing weird shit with your arms

We tend to focus almost exclusively on what our legs are doing during a trick. Are they squeezed together tight enough for the twist? Are they extended far enough for that double leg? Are toes being pointed?

But we often forget about our other two limbs, which are just as important to successful trick execution: our arms! When left to their own devices, our arms are prone to do some weird shit that throws us off axis and off balance. So notice: Are they flailing around during your vert kicks? Are they pulled in tight for your twists? Are they working with or against your momentum during your transitions?

A good place to start when examining your arm motion is to look in all the places you’d least expect: What is your non-touchdown arm doing during your touchdown raiz? What are your arms doing during your cheat kicks? If your answer is “I don’t know,” you may wanna check it out, because they might be messing up your trick. Be just as intentional about your arms as you are about your legs.

6. You're not blocking enough

Blocking is the art of transforming horizontal momentum (like running) into vertical momentum (like jumping). And every setup you can imagine—J step, masterscoot, touchdown raiz—is really just a fancy way to block more effectively. If, upon landing a trick, you discover that you’ve accidentally drifted off to the side of the spot where you should be landing, there’s a good chance you’re not blocking properly. So take a long, hard look at your setup, and focus on how you can bring more of your momentum straight into the sky. If your momentum goes anywhere but up or into a rotation, it’s being wasted.

7. You're not fighting for the landing

Ever find yourself landing a trick perfectly fine, but still putting your hand down for no good reason? Yeah, me too. When you crash a trick over and over again, you develop the unconscious assumption that the next attempt will also result in a fall. So even when you land properly, you may put a hand down—or have your legs collapse entirely—because that is what your mind has come to expect will happen.

But it doesn’t have to be this way—look at Nick Fry, for example. Even when his landing is sketchy as hell, he often finds a way to raiz, aerial, or otherwise contort his body to help him stay on his feet. And that’s because he fights for the landing. He believes that he can and should land that trick—so he will, dammit.

It may not be easy, but just like Nick Fry, we need to go into every single trick attempt expecting to land. Before launching yourself into the air, take a moment to visualize yourself landing the trick. Really experience that moment in your imagination—make it feel as real as you can, then decide, “You know what, I’m really gonna do it. I’m gonna land this shit right now.” Then when you actually go for the trick, be sure to stay focused not only at the beginning and middle of the skill, but also at the end. And once your feet hit the ground, fight for that landing in any way you can.

When we’re first trying a move, we get nervous. And when we get nervous, we tend to rush things. And when we rush things, we don’t set—or land properly. Setting means taking off for a trick, waiting to get high enough in the air, and only then executing the trick. Whether it’s a cork, a snapu, or a simple back tuck, if you rush to execute the move as soon as you leave the ground, you won’t have enough height to land properly. So just relax, be patient, and take your time. Set big, go high, and smash that trick.

9. Your head's not in the game

Tricking is just as much a mental activity as it is a physical one, so if you’re all jefferied up in the dome piece, you’re gonna struggle to land the trick you want. Is the gym’s wack music throwing you off? Are you relying too much or too little on the hype from your session buddies? Are you stressed about work stuff? Life stuff? Stuff stuff? Yeah, that could be part of the problem.

No worries though, just do whatever you can to get your head straight, like meditate or watch some funny videos to shake off the stress. And if there’s not much you can do, “This too shall pass,” as they say. And when it does, you’ll be ready to level up.

Why do martial artists often yell when they deliver their most powerful strikes? Because exhaling is a great way to supercharge the strength of your movements. So pay attention to your breathing patterns as you trick—are you holding your breath? Probably not the best idea. Your muscles need oxygen to function, so especially when you’re hoping to finish a tough combo, you gotta be sure you’re breathing.

And don’t just take my word for it on this one—Scotty Skelton is the first person I’ve seen talk about this in a tricking context, and he’s right on the money.

11. You haven't drilled it enough

In case you can’t tell, I analyze the shit out of tricks. So at a session, I’ll often catch myself thinking, “I don’t know what’s wrong! I’ve studied every aspect of the technique, and I still haven’t landed it. Surely there must be a secret tip that I haven’t thought of yet. Maybe if I just go back and study more footage...” And then I realize that I’ve only tried the move like 3 times that day.

Ironically enough, the biggest takeaway from this list should be that there’s no silver bullet or magical tip that will help you instantly land any trick. At the end of the day, you won’t master the trick you want without drilling it over and over, as Kojo demonstrated perfectly with his 1,000 rep challenge. Studying tricks will get you nowhere without tons of practice, and as you go through more reps, you build up your physical strength and mental comfort level with the skill. So keep going, don’t be too hard on yourself, and go slay those tricks!

Adrenaline: Does It Suck?
The 4 Keys to Tricking Smarter, Better, and Longer
Trickers: Let’s Talk About Pain
The Tricking Travel Guide: Road Trip Edition
Admit It: Your Joints Suck
What Happened To New Heights?
The Quad: Does It Really Count?
Why I Will Never Be the Best
Why You'll Never Find "Good Tricker" in the Dictionary
Site
Help